Acupuncture for Hypertension – Is It Feasible? 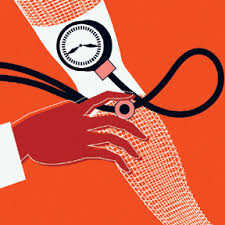 In the study summarized here, acupuncture given by experienced Chinese clinicians to patients with hypertension produces significant reductions in systolic and diastolic blood pressure. The beneficial effect does not persist after the 6-week treatment period, and conflicts with a recently reported study of similar design.

There have been many reports that acupuncture can lower blood pressure in hypertensive patients, but these are rarely well-controlled, randomized, blinded studies, which represent the gold standard for demonstrating effectiveness of a treatment. One of the most recent controlled trials, reported in 2006, showed no benefit of acupuncture over a sham procedure, and the approach is not widely used in Western therapeutics.1 However, a new study, this time from Germany, has found a significant benefit of the procedure over a 6-week period in hypertensives. It’s reported in the journal Circulation , and we summarize it here.

This trial was the result of cooperation between the University of Nanjing, China, and the Ottobeuren Clinic and the Erlangen University Clinic, Germany. This collaboration allowed acupuncture to be administered by experts in Chinese medicine, an important consideration.

Patients with mild or moderate hypertension were enrolled at the Ottobeuren Clinic; they had blood pressures ranging from 140/90 to 179/109 mm Hg, or they were on antihypertensive medication for the previous 2 months. They were excluded if they had renal problems, diabetes, atrial fibrillation, or a history of cardiovascular events such as heart attack or stroke. On enrollment, they were randomly allocated to receive acupuncture or sham treatment for 6 weeks. Patients returned for follow-up exams within 3 days after finishing treatment, and then after 3 months and 6 months.

A total of 160 patients were randomized to treatments – 83 to active and 77 to sham acupuncture. Their average age was 58, and 49% of them were men. Most of them (78%) were receiving antihypertensive medication, which was kept unchanged during the study. 140 of the subjects finished the treatment course – 72 active and 68 sham acupuncture patients.

The 24-hour ambulant blood pressures for the two groups, measured at the end of the 6 weeks, showed an average difference in favor of the active acupuncture treatment of 6.4 mm Hg systolic and 3.7 mm Hg diastolic. The most pronounced difference was seen for the day-time systolic blood pressure, which was reduced in the active group by 7.3 mm Hg. In the sham treatment group all blood pressure measurements had increased by about 2 mm Hg.

At 3 and 6 months after the end of the course of treatment average systolic and diastolic blood pressures in the active acupuncture group had returned to pretreatment levels. No patient developed any adverse effects, and no patient died.

There are two main questions. How do these findings reconcile with the controlled study1 reported last year? And do they have any practical consequences for treating high blood pressure?

The SHARP study protocol appears very similar to that of the present study, although it is not clear if only Chinese specialist acupuncturists administered the treatment. And only 12 sessions (or less), spread over 6 to 8 weeks, were used. However, there was no significant difference between the active and sham-treated patients in reductions in blood pressure.

The present study, however, produced beneficial effects in the actively-treated patients but none in the sham group; the magnitude of change was equivalent to that reported from controlled studies of lifestyle measures (such as weight reduction, salt limitation, and vigorous exercise), or indeed, from many well-controlled drug studies.

The authors of the present study suggest that acupuncture may offer an alternative therapeutic option for hypertension, especially in those patients who want to avoid drug therapy. Many antihypertensive drugs have unpleasant side effects, while acupuncture has few, if any; the only complaint is of occasional very slight pain associated with the insertion of the needles. It seems unlikely, however, that acupuncture will make a major contribution to the therapy of hypertension; multiple weekly sessions lasting 30 minutes and the need to use traditional Chinese experts will prove inconvenient and, perhaps, more costly than medication. The conflicting results from the two trials discussed here do not lend much encouragement, either. Nevertheless, the positive findings in this study may conceivably give some insight into the mechanism of hypertension to researchers prepared to seek a link between the technique and physiologic responses.

This entry was posted on Monday, August 13th, 2007 at 1:20 am and is filed under Health Info. You can follow any responses to this entry through the RSS 2.0 feed. You can leave a response, or trackback from your own site.

4 Responses to Acupuncture for Hypertension – Is It Feasible?